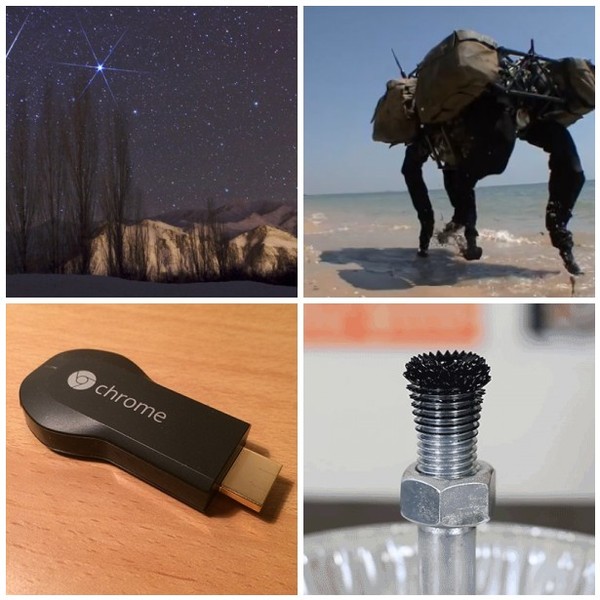 “If you’re looking for a way to see an amazing sight while simultaneously freezing your butt off, do I have the meteor shower for you: the Geminids!”

Yahoo CEO Marissa Mayer apologized Friday via Tumblr for a Yahoo Mail outage that affected 1% of their users (about 100,000 accounts).

Will Sprint bid on T-mobile next year?

The Wall Street Journal, citing unnamed sources, said Sprint is working on a possible bid for T-Mobile for the first half of next year.

GeekBit: The Earth and Moon Dance in a Video Taken from Space

On Oct. 23, 2013, the Juno spacecraft stole a little bit of Earth’s energy. By doing so, it increased its speed relative to the Sun, catapulting it on its way to the planet Jupiter.

As it flew past our planet (much) faster than a speeding bullet, it took a series of images of Earth, which also happened to capture the Moon in its stately orbit around us. The resulting animation is really quite enthralling.

Geek Bit: How to make a ferrofluid buzzsaw

To create this effect, magnetize a large bolt, then gently pour a bit of ferrofluid on top of it. Gravity will pull the liquid down the bolt along its spiral thread, and the magnetic field will create the look of spinning spikes.

The “Temperfect” mug’s phase-change insulation keeps coffee at the right temperature long enough for even busy datacenter sysadmins to drink it hot.

More Students Learn CS In 3 Days Than Past 100 Years

“Code.org, backed by Bill Gates and Mark Zuckerberg, boasts in a blog post that thanks to this week’s Hour of Code, which featured a Blockly tutorial narrated by Gates and Zuckerberg.”

Java is to JavaScript what Car is to Carpet. – Chris Heilmann

What is Chromecast (and how does it compare to Roku 2 and Apple TV)?

Chromecast is a digital media streaming adapter developed by Google. The device plays audio/video content on a high-definition media viewing devices by streaming it via Wi-Fi from the Internet or local network.

Thanks to listener John, from Wisconsin, this story is hot off the presses. Google purchased Boston Dynamics – the makers of many amazing and disturbing robots.

Google claims that a new privacy empowerment feature of Android app management was released by accident and is not back off again in newest update.

Upload PDF and EPUB files to Google Books on Android

Google now lets you upload your personal reading content directly from your Android device. This offers a much more convenient way to read the things you want, rather than just what’s available on the Google Play Store.

How to Use Twitter's New Crisis Alerts

Among numerous new features rolled out by Twitter in recent months, two of the most useful are crisis alerts and the ability to pre-schedule your tweets ahead of time.

A study by Incapsula suggests 61.5% of all website traffic is now generated by bots. The security firm said that was a 21% rise on last year’s figure of 51%.

Some of these automated software tools are malicious – stealing data or posting ads for scams in comment sections.

But the firm said the biggest growth in traffic was for “good” bots.