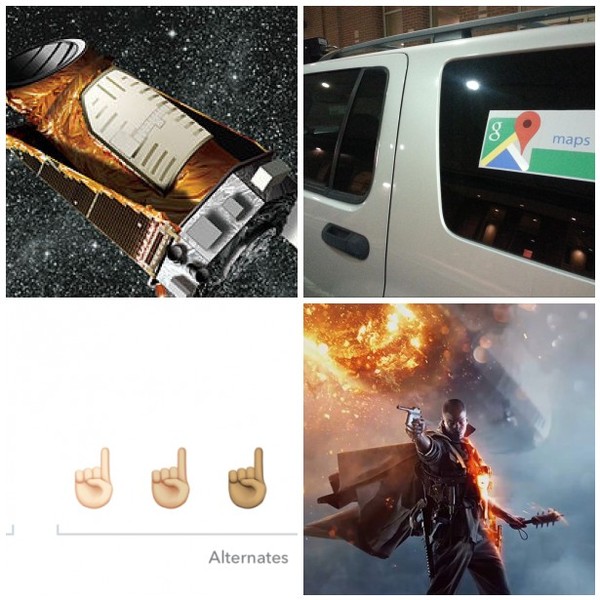 Kid adds text replacement macros to parents iPhone. A.k.a. Remember your kids are smarter than you

John Oliver’s rant about science reporting should be taken seriously

On Sunday, John Oliver managed to cover the same ground and more, and he did it with a lot more flair and humor—all in under 20 minutes. If you have the time, it’s well worth a watch.

A group of researchers has released a data set on nearly 70,000 users of the online dating site OkCupid. The data dump breaks the cardinal rule of social science research ethics: It took identifiable personal data without permission.

The information — while publicly available to OkCupid users — was collected by Danish researchers who never contacted OkCupid or its clientele about using it.

Hidden microphones that are part of a clandestine government surveillance program that has been operating around the Bay Area has been exposed.

An SUV tucked away in the shadows of the Philadelphia Convention Center’s tunnel bears the ubiquitous logo for Google Maps, and mounted on top of the vehicle are two high-powered license plate reader cameras. To the average passerby, it might appear to be a Google street view vehicle.

To help with his class this year, a Georgia Tech professor hired Jill Watson, a teaching assistant unlike any other in the world. Throughout the semester, she answered questions online for students, relieving the professor’s overworked teaching staff.

But, in fact, Jill Watson was an artificial intelligence bot.

Kepler is a space observatory launched by NASA to discover Earth-size planets orbiting other stars. The spacecraft, named after the Renaissance astronomer Johannes Kepler, was launched on March 7, 2009, into an Earth-trailing heliocentric orbit.

Prior to the release, a large subset of the emoji were rendered as phenotypically white, and that was the only available option. In the new ostensibly inclusive set, emoji come in six flavors: a default yellow, and 5 shades of skin tones.

According to Indy Neidell, the voice behind The Great War video, the trailer is a hodgepodge of accuracy. Some of the most spectacular moments in the trailer, such as the tanks bursting into trenches or giant, ominous zeppelins hovering, are actually historically accurate. The trailer often shows soldiers wearing custom armor or carrying weapons from the opposing side.

We present a novel approach for real-time facial reenactment of a monocular target video sequence (e.g., Youtube video). The source sequence is also a monocular video stream, captured live with a commodity webcam. Our goal is to animate the facial expressions of the target video by a source actor and re-render the manipulated output video in a photo-realistic fashion.

Software solves the mystery of a 2,500 year-old poem by Sappho

One of these fragments, called “Midnight Poem,” was written in the mid-sixth century BCE to an absent lover. Due to tantalizing hints in the poem, scholars have long debated when it was written. Now, thanks to software used to simulate night skies in planetariums, scientists have figured it out.

Is this the world’s first “perfect” game of Donkey Kong?

Since 2007’s The King of Kong hit theaters, the back-and-forth race for ever-higher scores on the arcade classic Donkey Kong has attracted outsized attention from competitive gamers. Last week, Wes Copeland tried to put that battle to bed once and for all with an incredible new world record score of 1,218,000 points.

Yet there’s still some reason to believe higher Donkey Kong scores are technically achievable, even if no one in their right mind may be able to do so any time soon.

In Oracle v. Google, a Nerd Subculture Is on Trial

The problem with Oracle v. Google is that everyone actually affected by the case knows what an API is, but the whole affair is being decided by people who don’t, from the normals in the jury box to the normals at the Supreme Court—which declined to hear the case in 2015, on the advice of the normals at the Solicitor General’s office, who perhaps did not grasp exactly how software works.

The facts are not in dispute. Google copied a portion of Oracle’s Java application programming interface (API) to create the Android operating system — the most installed mobile operating system in the world.
[…]
The Federal Circuit, overturning the district court’s decision, decided that Oracle’s Java API is copyrightable. And in June of this year, the U.S. Supreme Court refused to consider the case. — techcrunch