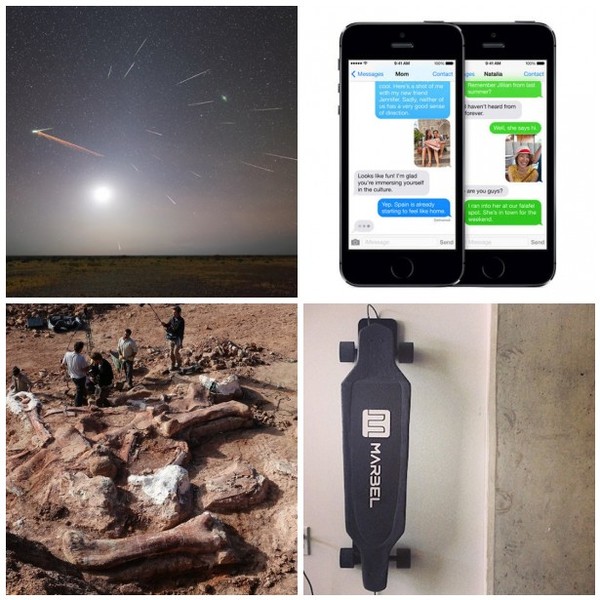 With over 700,000 miles logged by Google’s self driving cars and zero traffic citations it could be that local government reliance on citation revenue is not sustainable.

Apple get’s sued over lost iMessages / Text Messages when a person moves from iOS to Android.

Apple responds that they are aware of problems with iMessage and that this problem will get a little better because Apple recently addressed an iMessage server bug.

BTW: You can do things to ensure that you still get texts

Experts are predicting we may be in for quite a show: a brand spanking new meteor shower that will peak on the evening of Friday, May 23, 2014! Folks in the United States and Canada have the most favored viewing locations for this event (but that doesn’t mean you should forget about it if you’re elsewhere). Predicted rates for this new shower are quite high, about 100–400 meteors per hour, far higher than normal showers. And they’ll appear to be coming from an area of the sky near the north pole, so they should be visible raining down all over the sky!

Based on its huge thigh bones, it was 40m (130ft) long and 20m (65ft) tall. Weighing in at 77 tonnes, it was as heavy as 14 African elephants, and seven tonnes heavier than the previous record holder, Argentinosaurus. Scientists believe it is a new species of titanosaur – an enormous herbivore dating from the Late Cretaceous period.

The first legislation aimed specifically at curbing US surveillance abuses revealed by Edward Snowden passed the House of Representatives on Thursday, with a majority of both Republicans and Democrats.

But last-minute efforts by intelligence community loyalists to weaken key language in the USA Freedom Act led to a larger-than-expected rebellion by members of Congress, with the measure passing by 303 votes to 121.

The bill’s authors concede it was watered down significantly in recent days, but insist it will still outlaw the practice of bulk collection of US telephone metadata by the NSA first revealed by Snowden.

The NSA Is Recording Every Cell Phone Call In the Bahamas

The National Security Agency is secretly intercepting, recording, and archiving the audio of virtually every cell phone conversation on the island nation of the Bahamas. According to documents provided by NSA whistleblower Edward Snowden, the surveillance is part of a top-secret system – code-named SOMALGET – that was implemented without the knowledge or consent of the Bahamian government.

Cisko Complains To Obama About NSA Adding Spyware To Routers

Glenn Greenwald’s book No Place to Hide reveals that the NSA intercepts shipments of networking gear destined for overseas and adds spyware. Cisko has responded by asking the President to intervene and stop this practice, as it has severely hurt their non-U.S. business, with shipments to other countries falling from 7% for emerging countries to over 25% for Brazil and Russia.

Social Media - Rethink what it is doing to kids