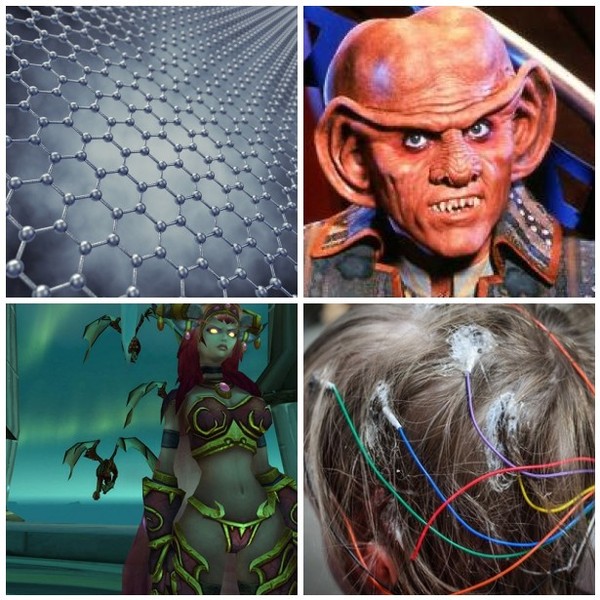 The Ferengi Plan for the FCC

The owner of Neocities.org figured out what internal IP blocks the FCC uses, and throttled all connections from those blocks to 28.8kbps modem speeds on the Neocities front site.

Some places in the US already allow cyclists to treat stop signs as yields, and red lights as stop signs, and these rules are no more dangerous — and perhaps even a little safer — than the status quo.

The researchers found that the men were more than three times as likely as the women to gender-switch (23 percent vs. 7 percent). When selecting female avatars, these men strongly preferred attractive avatars with traditional hairstyles—long, flowing locks as opposed to a pink mohawk. And their chat patterns shifted partway toward how the real women spoke: These men used more emotional phrases and more exclamation points than the men who did not gender-switch. In other words, these men created female avatars that were stereotypically beautiful and emotional.

Although the gender-switching men could partially talk the talk, they completely failed to walk the walk. The researchers found that all the men in their study moved around in a very different way than the women. The men moved backward more often, stayed farther away from groups, and jumped about twice as much as the women did. When it came to moving around, the men behaved similarly whether they gender-switched or not. So if you’re trying to figure out if that female Night Elf is really a man, focus on how they move around. As study author Mia Consalvo, a professor at Concordia University, says, “movement is less conscious than chat, so it can be an easier ‘tell’ for offline gender.”

It gets stranger. The lead author of the paper, Rosa Martey at Colorado State University, told me via email that “it’s not necessarily the case that men are trying to appear female when they use a female avatar. Our interviews did not suggest that those who switched were trying to ‘pretend’ to be women players.”

What You Need to Know About Text-to-911

Text-to-911 is the ability to send a text message to reach 911 emergency call takers from your mobile phone or device.

In the future, text-to-911 will be widely available in the United States. However, for now, the ability to contact 911 using text is only available on a limited basis in a few markets. For this reason, you should not rely on text to reach 911.

“A surprising feature of Twitter is that there are many pairs of tweets from the same author that have different wordings but point to the same URL. Today, Chenhao Tan at Cornell University in Ithaca and a few pals, use a huge number of these pairs of tweets to study the question of what kind of wording makes a tweet successful.

“In the process, they’ve discovered a set of features that distinguish highly shared tweets from those that are less popular.”

Christian Isaac Peñaloza Sanchez, a PhD candidate at the University of Osaka, Japan is working on a brain-computer interface that learns from the response of the user and gets better over time.

Lockhead Martin has a new patin that, as John Stetson, senior engineer describes as “500 times thinner than the best filter on the market today and 1,000 times stronger. The energy that’s required and the pressure that’s required to filter salt is approximately 100 times less.”

Make sure not to take strange calls from “Windows Support.”

EFF updated Who Has your Back

Find out what large tech companies are handling your data with privacy and respect in mind.