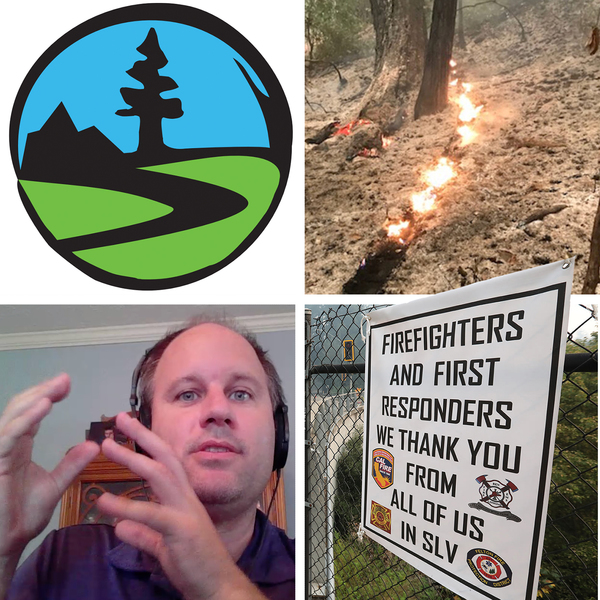 The San Lorenzo Valley in Santa Cruz County has a partial Do Not Drink / Do Not Boil order in affect: is that order appropriate, what causes Wildfire water contamination, and what are good actions we as a community can take?

Our guest is Andrew J Whelton, Associate Professor of Civil Engineering and Environmental and Ecological Engineering at Purdue University.

The Tubbs Fire (2017) and Camp Fire (2018) are the first known wildfires where widespread drinking water chemical contamination was discovered in the water distribution network and not in the source water after the fire. In both disasters, drinking water exceeded state and federal government‐defined exposure limits for several volatile organic compound (VOC) contaminants (e.g., benzene at 40,000 µg/L [Tubbs] and >2,217 µg/L [Camp]). This work outlines factors that influence wildfire‐induced drinking water quality threats based on the findings from these two fires and explores related scientific and policy issues. For example, certain plastics in the network may serve as a primary VOC source through in situ plastic pyrolysis. Depressurization of the distribution network likely transported contaminated water that subsequently contaminated undamaged infrastructure. As wildfires at the wildland–urban interface are likely to occur more frequently, greater scientific evidence is needed to guide agency responses that will better protect public health.

Santa Cruz County, already struggling with the challenges of the COVID-19 pandemic, is now in the midst of another disaster—the CZU August Lightning Complex Fires. Donations to the Community Foundation’s Fire Response Fund will be distributed to nonprofit agencies and organizations directly assisting individuals to meet needs as they arise.

100% of donors’ gifts will be used for grantmaking. All donations are tax-deductible.

Listener Miles Z made some notes while listening - here they are:

In case of doubt, consult the interview, as I am not an expert. The notes are about in the same order as the interview.

Contamination can come from multiple sources, including backflow when the system becomes depressurized and air contaminated with smoke leaks into the pipes. It can also result from homes that were equipped with plastic pipes that burned. As well as the pipes we know about that burned, i.e. the 5 miles of HDPE pipe through the forest.

The monitoring tests that the water district routinely runs downstream are limited to only particular VOC’s (Volatile Organic Compounds) and are targeted at only those that might be produced by adding chlorine to the system. These less stringent tests are for THM’s (trihalomethanes) which are a form of VOC.

These tests are not adequate to certify the safety of water possibly contaminated from a fire (as described above).

In the Paradise fire, the State refused to take ultimate responsibility for certifying that the water is safe, saying it was up to the local district to do so. (but there are ways the district can reach out for qualified help, discussed below) It is unclear whether or not SLVWD realizes this yet.

Additionally, he said “there is nuance” regarding these DND/DNB orders, which I think means that experts disagree on what exactly they mean. (ndlr: good luck with that!)

“You have to test fast.” The 7-day turnaround and only 40 samples are woefully inadequate. They should be getting results within a day by utilizing more labs. Apparently the number of laboratories used is a key bottleneck.

Benzene can come from burning brush or trees. This VOC (and others) prefer to be airborne, so washing vegetables or taking a shower could release them. Quantities that are toxic may be odorless, so don’t count on being able to detect them by smell.

Multiple contaminants can interact, which is one reason why thorough and rapid testing is essential.

SVOC’s (Semi-Volatile Organic Compounds) are larger and heavier, so they tend to stay in the water. They also collect in the body in fatty tissue, so the acceptable limits for safe exposure are lower than those for VOC’s.

Both VOC’s and SVOC’s can work their way into plastic pipes, so they are hard to get rid of. That’s not a problem with metal, but metal is more expensive.

The Water District can reach out for help

SLVWD can and should call in other agencies for “mutual aid” as the fire and PG&E crews are doing.

They really need to be taking 100-300 samples per week, and use multiple laboratories for effective turnaround. The current turnaround of 7 days is way too long.

The equipment required is a GCMS system (Gas Chromatograph Mass Spectrometer). UCSC probably has them, but (a) not the funding (which might be able to come from FEMA) and (b) are probably not certified by the state, though they still could be useful for preliminary results.

The current 40 samples will not be representative, and the conditions of the water can change at any time. Contaminants can flow from one place to another within the system.

Note that the State is responsible for providing emergency water if the local district cannot in an emergency.

It’s possible to install a water treatment system for your own home. In general, this is not the best way to deal with the VOC/SVOC contamination for several reasons.

There is no official certification for these systems, and the company that sells them will typically run only a single test (for $250-300) which means they could easily misestimate the amount of actual contamination. This has actually happened in Paradise.

So what happens is that your insurance pays for it, then they’re done. So if it turns out the system is inadequate, you are on your own. In other words, the financial incentive is designed to create a potentially hazardous situation.

It’s much better for the water district to handle everything.

One measure Paradise implemented was requiring new homes to have backflow check valves (at $3000-$4000 a piece). Sometimes FEMA money can pay for these.