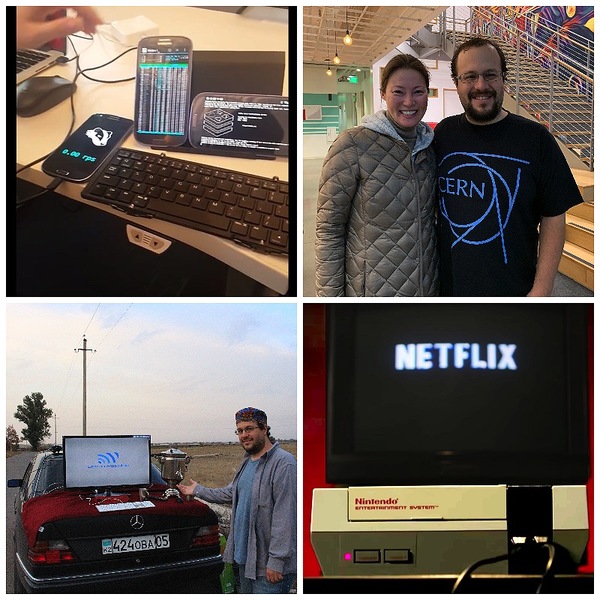 Software engineer and “I’ll show it to you at hackday… chap”, Guy Cirino joins Lyle for a chat about hacking at Netflix, driving across Asia, high energy particle physics at CERN, and improving streaming video better for everyone.

This is the one filmed partially in Kazakhstan.

Michael Paulson and Lyle chat about something similar to how the Hackday Honey Badger was implemented.

Watching Stranger Things gave Guy flashbacks to being a DoE scientist at Brookhaven National Labs. The g-2 experiment was a precursor to finding the Higgs Boson at CERN

A scintillator is a material that exhibits scintillation, the property of luminescence,1 when excited by ionizing radiation. Luminescent materials, when struck by an incoming particle, absorb its energy and scintillate (i.e. re-emit the absorbed energy in the form of light).[a] Sometimes, the excited state is metastable, so the relaxation back down from the excited state to lower states is delayed (necessitating anywhere from a few nanoseconds to hours depending on the material): the process then corresponds to either one of two phenomena, depending on the type of transition and hence the wavelength of the emitted optical photon: delayed fluorescence or phosphorescence, also called after-glow.

The Compact Muon Solenoid (CMS) is a general-purpose detector at the Large Hadron Collider (LHC). It has a broad physics programme ranging from studying the Standard Model (including the Higgs boson) to searching for extra dimensions and particles that could make up dark matter. Although it has the same scientific goals as the ATLAS experiment, it uses different technical solutions and a different magnet-system design.

The Superconducting Super Collider (SSC) (also nicknamed the Desertron1) was a particle accelerator complex under construction in the vicinity of Waxahachie, Texas.
Its planned ring circumference was 87.1 kilometers (54.1 mi) with an energy of 20 TeV per proton and was set to be the world’s largest and most energetic. It would have greatly surpassed the current record held by the Large Hadron Collider which has ring circumference 27 km (17 mi) and energy of 6.5 TeV per proton. The project’s director was Roy Schwitters, a physicist at the University of Texas at Austin. Dr. Louis Ianniello served as its first Project Director for 15 months.2 The project was cancelled in 1993 due to budget problems

The Mongol Rally is an intercontinental car rally that begins in Europe and ends in Ulan Ude, Russia. The rally originally ended in Ulan Bator, Mongolia, however to avoid punitive costs and taxes associated with vehicle imports and disposal, the rally now passes through Mongolia and ends in Ulan Ude. The principal launch is from Goodwood Circuit in the United Kingdom, with subsidiary starting points in the Czech Republic. It is described as the “Greatest Adventure in the World” and sees on average a 70% completion rate[according to whom?]. There are three fundamental Rules of the Rally

Blog of Some Guy

Interview with Ernest Cline about his awesome book Ready Player One.