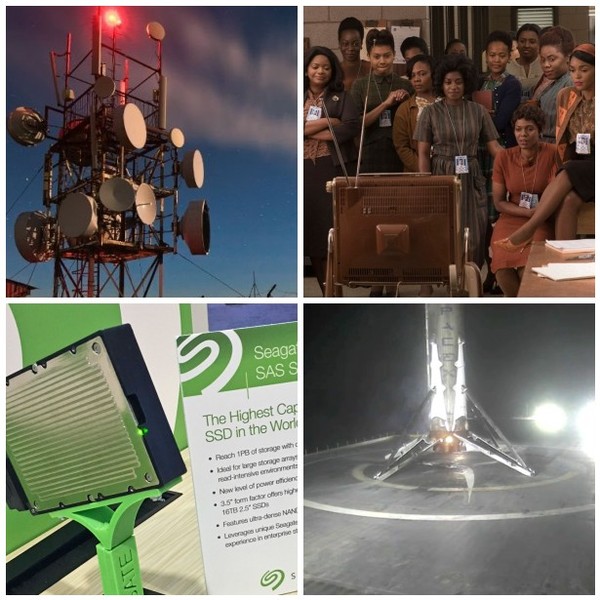 Another one of SpaceX’s Falcon 9 rockets successfully landed on a floating drone ship this evening, after the vehicle launched a Japanese communications satellite into orbit. The feat marks the fourth time SpaceX has landed one of its vehicles at sea and the company’s fifth rocket recovery overall this year.

Hidden Figures focuses on the achievements of Katherine Johnson (played by Taraji Henson from Person of Interest and Empire), winner of the 2015 National Medal of Freedom. Johnson, now retired, was a mathematician at NASA whose work helped plot the trajectories of orbiting spacecraft. The movie is your classic “nerd genius makes good” tale, as teachers discover the young Johnson’s incredible math skills that eventually led to her meteoric rise, including college at the age of 15. She was so brilliant that NASA hired her out of graduate school in the 1950s—even though she lived at a time when black women were rarely welcomed into the science and engineering professions.

And now, the CEO of Google Access (the company that oversees Fiber), Craig Barrett, has announced that they’re working on a plan to beam wireless broadband directly into homes across the US, telling re/code rather mysteriously, “[W]e are experimenting with a number of different wireless technologies.”

Seagate's new 60TB SSD dwarfs the others on the market

Seagate has just announced a whopping 60 TB solid-state-drive, the largest SSD yet with that sort of capacity. Unfortunately, the SSD is only meant for businesses, released as an addition to Seagate’s data center portfolio. With four times the capacity of the next leading SSD, this massive hard drive could hold up to 12,000 DVD movies or even a whopping 400 million photos. Just sit back and think about how ridiculous an amount of data that really is.

Miles and Dedi throw down on their strong RAID knowledge.

Can 42 US, a free coding school run by a French billionaire, actually work?

Welcome to 42 US, a free (as in beer) coding school, which opened just last month. Even the optional dorms are free. (Good news: laundry is also free! Bad news: you have to pay the dorm $75 a week if you want two meals a day.) Admittedly, it sounds totally crazy.

Somehow, HIV pulls off its retro act and this has remained somewhat of a mystery. According to the new paper, the answer lies in tiny pores (below) found throughout the virus’s protective capsid. The pores, which open and close in a manner similar to that of the iris in an eye, allow the virus to take in nucleotides while keeping its true nature hidden from the invaded cell until it’s too late.