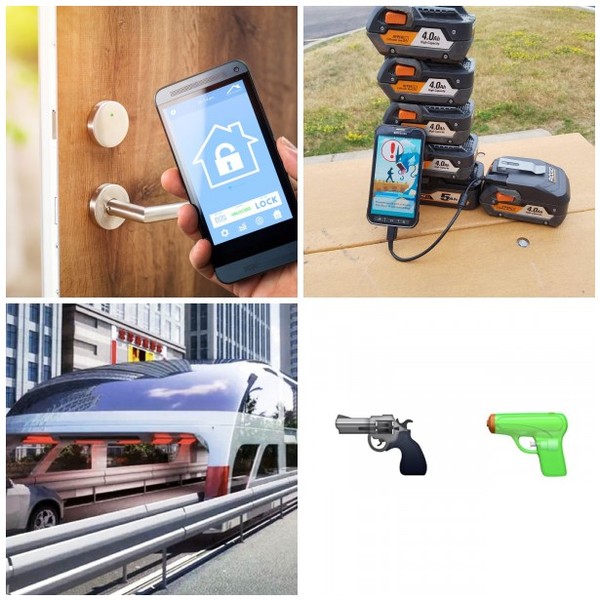 75 Percent of Bluetooth Smart Locks Can Be Hacked

16 Bluetooth smart locks he and fellow researcher Ben Ramsey had tested, 12 locks opened when wirelessly attacked. The locks — including models made by Quicklock, iBlulock, Plantraco, Ceomate, Elecycle, Vians, Okidokey and Mesh Motion — had security vulnerabilities that ranged from ridiculously easy to moderately difficult to exploit.

Therefore, it’s no surprise that the success of the power-draining app has led to a surge in sales of external battery packs. In fact, sales over the last two weeks are double those of a year ago, with 1.2 million portable battery packs sold

Recording from a Bedroom Developer Niantic was inevitably going to deploy cheat-detection technology, and hackers would subsequently work to break through that detection. Last week, we saw the first battle in that war, and so far it seems like the hackers are winning handily.

A Chinese company has officially rolled out one potential solution: the TEB-1, or Transit Elevated Bus. The giant “flying” bus, as some have called it, straddles two lanes of traffic and stands nearly 16 feet tall so that it can pass over cars on the roadway below.

What is the Return on Investment of a FarmBot?

From our analysis of how much food FarmBot can grow, we’re going to work with a quantity of 4.5 cups of veggies per day, or 135 cups/month. The table below shows the monthly direct costs of producing this much food with FarmBot vs buying it at the grocery store.

Trolling the internet for political gain

it has often been called a “troll farm.” The more I investigated this group, the more links I discovered between it and the hoaxes.

Microsoft is replacing an emoji it currently displays as a toy gun with a symbol for a real revolver, just a few days after Apple announced it would be swapping its own revolver emoji for a water pistol in a statement on the gun crime epidemic in the US.

This emoji change is part of the Windows 10 Anniversary Update, which is rolling out now.

Improving Color on the Web

The next revolutionary improvement in displays is happening now: better color reproduction. Here I’ll explain what that means, and how you, the Web developer, can detect such displays and provide a better experience for your users.

People look guiltier when their actions are viewed in slow motion

Those digital records don’t just replay quick, life-altering events—they can be slowed down so that the slightest movements can be dissected. This, the logic goes, clarifies not just what happened, but helps explain what an alleged criminal intended to happen. But, according to a new study, slow motion might actually muddle our view.

The feature, called “Child reminder,” was made available to the public on Thursday, when Waze released its latest update on app stores for Android and iOS.

The new feature comes amid concerns over recent child hot car deaths. On the same day it was publicly released, a pair of 15-month-old twins died in Georgia after allegedly being left in a hot car by their father, according to police.