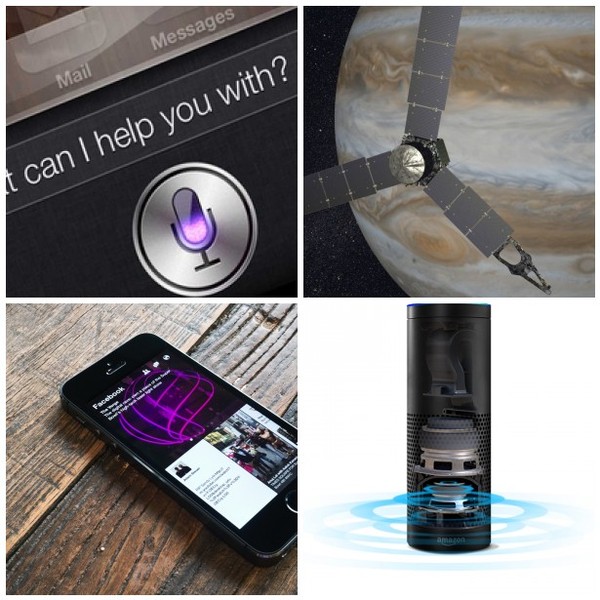 The FBI recommends not to indict Hillary Clinton for email misconduct

The Federal Bureau of Investigation has completed its investigation into Hillary Clinton’s use of a personal email server and is recommending that the Department of Justice not indict Clinton, FBI Director James Comey said in a press conference today. The recommendation is not binding, and the ultimate decision will be made by the Department of Justice. Still, the recommendation will likely clear longstanding questions that have dogged Clinton’s presidential campaign for over a year.

Lyle gets an Echo

Amazon Echo is a hands-free speaker you control with your voice. Echo connects to the Alexa Voice Service to play music, provide information, news, sports scores, weather, and more—instantly. All you have to do is ask.

The Voice UI has Gone Mainstream

We conducted two separate studies in early May, since our intuition told us voice would be a major theme of Google I/O and at Apple’s upcoming WWDC. We focused the Amazon Echo study on our early adopter panel since we knew we would not get a statistically significant number of Echo owners in our mainstream representative US consumer panel.

The second study was focused on our mainstream consumers to understand how they use Siri and Ok Google (or any Google voice-based search technique) to better learn how both are used and what the overall perception of each is by mainstream consumers.

15 Awesome Things You Didn't Know Siri Can Do For You

Some awesome things that Siri can do for you include posting to Twitter or Facebook, search for Tweets, math, and more.

Comcast will let customers get Netflix on its set-top box

Said the pair in a statement: “Comcast and Netflix have reached an agreement to incorporate Netflix into X1, providing seamless access to the great content offered by both companies. We have much work to do before the service will be available to consumers later this year. We’ll provide more details at that time.”

The company has announced that it is making a huge tweak to its news feed that will privilege “posts from friends and family”. At the same time, that will mean reducing the visibility of posts from publishers – potentially bringing huge changes to the media industry at the same time.

Facebook is shutting down its Paper newsreading app on July 29th

Share on Facebook Tweet Share Pin (4)
Facebook is shutting down Paper, a bold reimagining of the company’s flagship app for iOS that impressed critics but failed to attract a large audience, the company said today. The app transformed the core Facebook experience into a kind of newsreader, with customizable sections for politics, technology, food, and other subjects. Visitors to the app received a message saying the app would no longer function after July 29th.

After 1.7 billion miles Juno nails its Jupiter orbit to within tens of miles

Traveling at a speed of 165,000mph toward a swirling gas giant Monday night, the Juno spacecraft would have no second chances. Had its Leros 1b engine burned too long, Jupiter would have swallowed Juno into its gaseous maw. If the British-made engine burned too short, the spacecraft would have zipped onward into space, lost into the inky blackness forever. But Juno needed no second chance late on the night of July 4th as its hardy little engine fired for a total of 2,102 seconds, perfect to within one second, inserting the spacecraft neatly into orbit around Jupiter.

PBS Space Time explores the outer reaches of space, the craziness of astrophysics, the possibilities of sci-fi, and anything else you can think of beyond Planet Earth. Host Matt O’Dowd breaks down the both the basic and incredibly complex sides of space and time.

Early Google employees decided to work with a shared codebase managed through a centralized source control system. This approach has served Google well for more than 16 years, and today the vast majority of Google’s software assets continues to be stored in a single, shared repository. Meanwhile, the number of Google software developers has steadily increased, and the size of the Google codebase has grown exponentially (see Figure 1). As a result, the technology used to host the codebase has also evolved significantly.

Experts say the adult VR industry will reach $1 billion by 2025 and new data suggests their claims are becoming a reality.