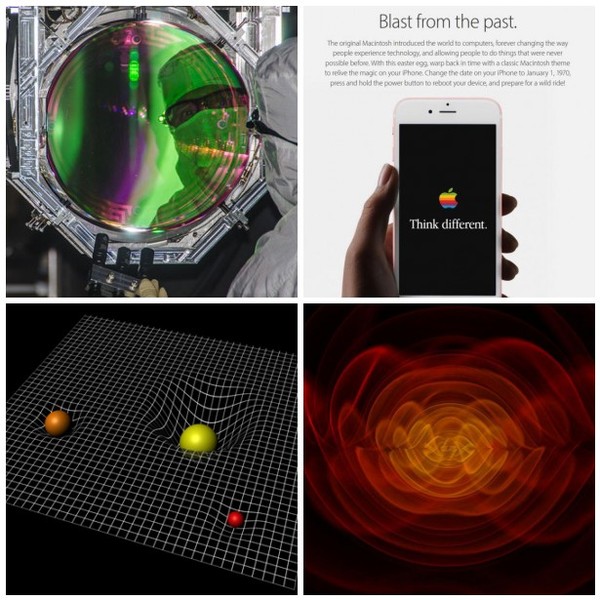 Starting with software fails and then talking about the confirmation of Gravitational Waves existence and detection.

January 1, 1970 is the first day of the Unix epoch; Unix-like systems measure times and dates as the number of seconds since that day. This is traditionally stored as a 32-bit number (which is going to cause some trouble in 2038), and it’s currently speculated that 64-bit iPhones are doing something peculiar when handling system times that are close to zero.

The deletions happen whenever Mac users log in to the Adobe service after the update has been installed, according to officials from Backblaze, a data backup service whose users are being disproportionately inconvenienced by the bug. Upon sign in, a script activated by Creative Cloud deletes the contents in the alphabetically first folder in a Mac’s root directory.

Blame someone else for your bad code.

Samsung has confirmed that its “smart TV” sets are listening to customers’ every word, and the company is warning customers not to speak about personal information while near the TV sets.

Gravitational Waves Exist: The Inside Story of How Scientists Finally Found Them

They formed a new black hole, sixty-two times as heavy as our sun and almost as wide across as the state of Maine. As it smoothed itself out, assuming the shape of a slightly flattened sphere, a few last quivers of energy escaped. Then space and time became silent again.

The waves rippled outward in every direction, weakening as they went. On Earth, dinosaurs arose, evolved, and went extinct. The waves kept going. About fifty thousand years ago, they entered our own Milky Way galaxy, just as Homo sapiens were beginning to replace our Neanderthal cousins as the planet’s dominant species of ape. A hundred years ago, Albert Einstein, one of the more advanced members of the species, predicted the waves’ existence, inspiring decades of speculation and fruitless searching. Twenty-two years ago, construction began on an enormous detector, the Laser Interferometer Gravitational-Wave Observatory (LIGO). Then, on September 14, 2015, at just before eleven in the morning, Central European Time, the waves reached Earth.

Better start shining up some new Nobel Prize medals: Scientists have reported that, for the very first time in history, they have detected gravitational waves.

And oh my yes, this is a very big deal. It will open up an entirely new field of astronomy, a new way to observe the Universe. Seriously.

Gravitational waves (not to be confused with gravity waves, which are a totally different thing) are ripples in the fabric of spacetime, caused when a massive object is accelerated.

Before there were botnets, the MyDoom worm, and Stuxnet, malware that hit your DOS personal computer was of a completely different breed. Some were simply annoying, some would corrupt files or mess with your system, but they all did it with style.

Now you can relive the magic of malware from the 1980s and 1990s courtesy of the Internet Archive’s brand new Malware Museum. Here, through the safety of an in-browser DOS simulator, you can relive some of the highlights of malware from yesteryear. This initial collection was created by Jason Scott, archivist and software curator for the Internet Archive, and Mikko Hypponen, chief research officer of F-Secure.

Music publisher Warner/Chappell will no longer be allowed to collect licensing royalties on those who sing “Happy Birthday” in public and will pay back $14 million to those who have paid for licensing in the past, according to court settlement papers filed late Monday night.