Big Solar Sends Kids to the AI Mine 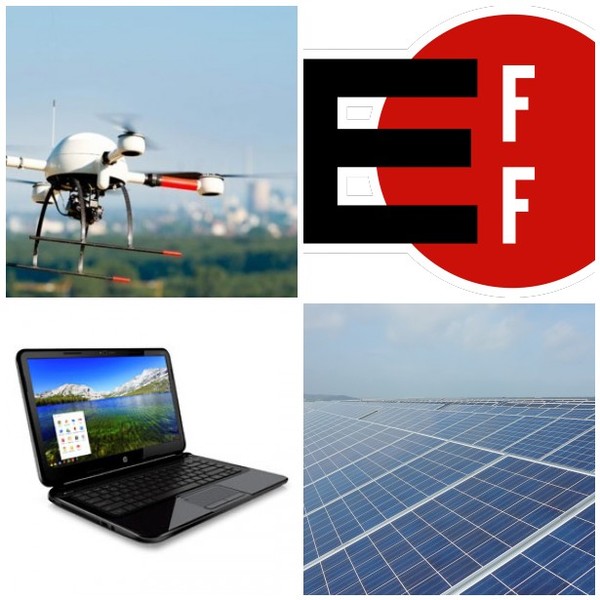 A town in North Carolina says no to solar power, There’s a new game in town when it comes to Artificial Intelligence, and the EFF brings light to the side effects of outsourcing public school IT services to companies like Google.

The citizens of Woodland, N.C. have spoken loud and clear: They don’t want none of them highfalutin solar panels in their good town.
bq. Another resident—a retired science teacher, no less—expressed concern that a proposed solar farm would block photosynthesis, and prevent nearby plants from growing. Jane Mann then went on to add that there seemed to have been a lot of cancer deaths in the area, and that no one could tell her solar panels didn’t cause cancer. “I want information," Mann said. “Enough is enough.”

We got a bit of feedback on how we handled this story.. We kinda blew it. Here are a couple good letters from listeners…

Just listening to your show today. I keep hearing the story about the North Carolina solar thing. It’s actually not totally true.

It’s true that there were a couple of weird fears expressed at the meetings… the cancer one mainly. The panels sucking up the sun I think only referred to the shade created and the dead vegetation underneath the panels.

Thanks for the show,

I was a bit perturbed at your easy dismissal of the citizens of Woodland NC, when they didn’t want another solar farm in their town. Granted, the woman who blames solar for the increase in cancer is an easy target (but more below). But I think the real problem has to do with these small, rural towns.

A few points: Woodland is one of those towns that has little going for it. It’s rural, and not close to much. They’ve already got solar farms on three sides, evidently; the most recent dispute is about closing the fourth side. Now, solar farms, once built, don’t generate a lot of jobs, and the only other thing this town has going for it is the land, which, if it’s covered by solar panels, can’t be used for farming or anything else. So the teacher’s argument that nothing grows beneath panels is a cogent one for a largely-farming community, especially if there’s no other visible source for growth in the town.

Younger folks generally move away as soon as they can (there’s nothing to keep them there), leaving behind older residents. Older people are often sicker… so there might, in fact, be a larger proportion of cancer-sufferers in the town.

When I initially heard about this, I was as giggly as the geeks seemed to be. But the people in these towns are the people that the digital revolution, and the economic recovery, have largely passed by. These people are not stupid (well, not ALL stupid). Their concerns reflect their reality. And our missing that reality is a sign, essentially, of one of the divisions in the country.

I’d ask that the geeks think about that.

I don’t live in a town like that, and I don’t want to (this is Jim in Central Jersey, after all). But I’m glad I saw the article… in a sense, it makes me think of why so many people respond to demagogues, who voice the real concerns of these folks in a way they understand.

Please forgive the inordinate length of this email.

Not at all Jim, great letter. Thank you.
We kinda blew it on this story of the town of Woodland and solar “farms”.

Got a drone? It’s registration time, says the FAA

The US Department of Transportation has launched a “streamlined and user-friendly” online registration process for aerial drones, starting today. New regulations announced in October require all drone owners to register.
In the view of the Federal Aviation Administration, drones or “unmanned aircraft systems” (UAS) qualify as aircraft, even if operated by hobbyists, and will be regulated as such. The registration website has been launched and includes frequently asked questions about the process. Actual online registrations won’t begin until next Monday, December 21. For anyone registering in the first month, the $5 aircraft registration fee will be refunded.

OpenAI is a non-profit artificial intelligence research company. Our goal is to advance digital intelligence in the way that is most likely to benefit humanity as a whole, unconstrained by a need to generate financial return.
Since our research is free from financial obligations, we can better focus on a positive human impact. We believe AI should be an extension of individual human wills and, in the spirit of liberty, as broadly and evenly distributed as possible.
The outcome of this venture is uncertain and the work is difficult, but we believe the goal and the structure are right. We hope this is what matters most to the best in the field.

How Elon Musk and Y Combinator Plan to Stop Computers From Taking Over:

As if the field of AI wasn’t competitive enough — with giants like Google, Apple, Facebook, Microsoft and even car companies like Toyota scrambling to hire researchers — there’s now a new entry, with a twist. It’s a non-profit venture called OpenAI, announced today, that vows to make its results public and its patents royalty-free, all to ensure that the scary prospect of computers surpassing human intelligence may not be the dystopia that some people fear. Funding comes from a group of tech luminaries including Elon Musk, Reid Hoffman, Peter Thiel, Jessica Livingston and Amazon Web Services. They have collectively pledged more than a billion dollars to be paid over a long time period. The co-chairs are Musk and Sam Altman, the CEO of Y Combinator, whose research group is also a funder. (As is Altman himself.)

Mind you these are significant, but the big number to me is that recurring revenue from subscriptions now represents 74 percent of Adobe’s business.