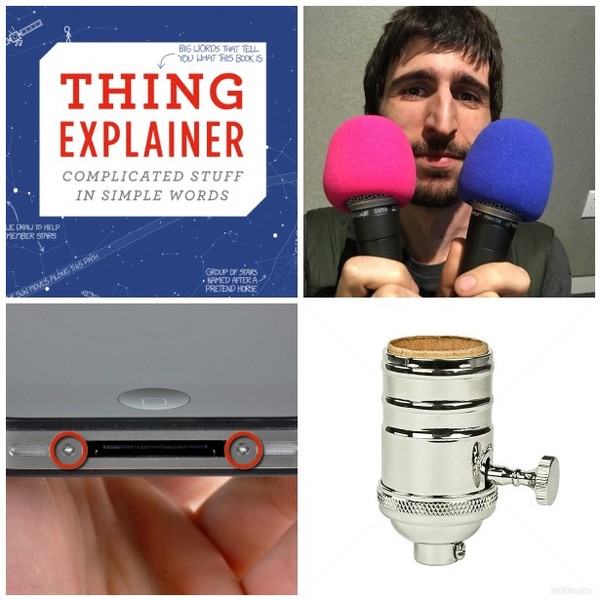 On Black Friday the Geeks fixed things, and urge you to do the same. You can figure things out, enjoy the learning, and learn to solve problems. Lyle and Ben chat about not knowing and still figuring things out.

In Thing Explainer: Complicated Stuff in Simple Words, things are explained in the style of Up Goer Five, using only drawings and a vocabulary of the 1,000 (or “ten hundred”) most common words. Explore computer buildings (datacenters), the flat rocks we live on (tectonic plates), the things you use to steer a plane (airliner cockpit controls), and the little bags of water you’re made of (cells).

Enter the Tamaserver, a bit of code running on a server that keeps track of a dozen or so Tamagotchis. On this server, a small population of Tamagotchis live their entire life not realizing they are just part of a gigantic computer. Here, Tamagotchis live, eat, love, and die, all without the messy violations of the laws of thermodynamics proposed in the Matrix trilogy.

Inspired by this xkcd cartoon

Spare Ideas: A good idea is worth 25 cents

As a programmer/developer, father, photographer, thespian, gamer, atheist, and general geek I’m always thinking up applications and services and not doing anything with the idea. I also get to talk to people who have cool ideas. The thing is, without action, even a good idea isn’t worth much.
So, on this tumblr I’ll throw up my ideas for services, applications, websites, artwork and the like. I might develop some of these at some point, but probably not. If you develop these drop me a note, I’d love to see them!

Can I Use PVC for Hot Water? - Answered

This is one of the most common questions people ask about using PVC pipe. Here’s the quick rundown…

The short answer: No.

iFixit and the right to repair

Manufacturers have attempted to use the Digital Millennium Copyright Act to claim that they own the software that makes an electronic an electronic, and tampering with that software is a copyright violation. There’s the fact that Apple quietly stopped accepting applications for “Authorized Service Provider” designations in 2010. There are the seizures of “counterfeit” parts being imported from China that may be legally legitimate. There are the lease programs carriers and Apple have started that ensure you won’t ever actually “own” a phone ever again.

“Normally if I purchase a hammer, if the head of the hammer falls off, I’m allowed to repair it and fix it. I can use the hammer again,” Charles Duan, director of Public Knowledge’s Patent Reform Project, told me. “For a lot of these newer devices, manufacturers want to say ‘We want to be the only ones to repair it’ because they make more profits off the repairs. They’ve found lots and lots of way to do this. Intellectual property law, contracts, end user license agreements, lots and lots of ways to try to make sure you can’t do what you want with your stuff.”

A screw drive is the system used to turn a screw.12 At a minimum, it is a feature on the screw that allows torque to be applied to it. Usually it also involves a mating tool, such as a screwdriver, that is used to turn it. The following heads are categorized based on commonality, with the less common drives being classified as “tamper-resistant”. yahoo “hey add blocker users, no email for you!” it’s a default rather than an action you have to take to block ads

Some people who logged into their Yahoo Mail accounts last week were greeted with an ultimatum: “Please disable Ad Blocker to continue using Yahoo Mail.” These users were unable to access their email accounts until they turned off their ad blockers or found a workaround for the problem.

The message is not a new policy, but was part of a trial, a Yahoo spokesman told Engadget over the weekend. A “small number” of Yahoo Mail users were prevented from accessing their email accounts because Yahoo detected they had an ad blocker installed on their computer. The message was most likely a result from an A/B test, a technique in which technology companies push changes to a small number of people to gauge user reaction before deploying them widely.

A microdose is about a tenth of the normal dose – around 10 micrograms of LSD, or 0.2-0.5 grams of mushrooms. The dose is subperceptual – enough, says Rick Doblin, founder and executive director of the Multidisciplinary Association for Psychedelic Studies, “to feel a little bit of energy lift, a little bit of insight, but not so much that you are tripping.”