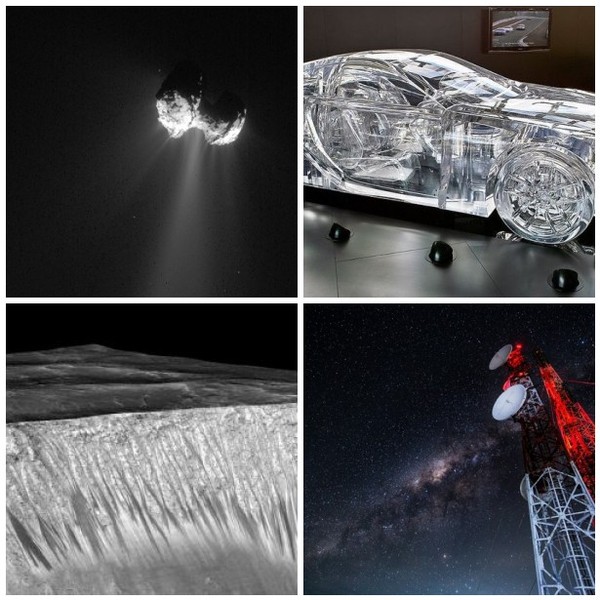 Mars, the Supermoon, and US LTE speeds are all wet. How we teach coding, and how the DMCA protects car company’s secrets.

Correction: Glass is not a liquid

By studying a glob of 20 million-year-old amber, scientists have proven once and for all that glass does not flow.

Some people claim that stained glass windows in old churches are thicker at the bottom than at the top because glass flows slowly like a liquid. We’ve known this isn’t true for quite some time now; these windows are thicker at the bottom owing to the production process. Back during medieval times, a lump of molten glass was rolled, expanded, and flattened before being spun into a disc and cut into panes. These sheets were thicker around the edges and installed such that the heavier side was at the bottom.

The Fifth Amendment right against compelled self-incrimination would be breached if two insider trading suspects were forced to turn over the passcodes of their locked mobile phones to the Securities and Exchange Commission, a federal judge ruled Wednesday.
“We find, as the SEC is not seeking business records but Defendants’ personal thought processes, Defendants may properly invoke their Fifth Amendment right,” US District Judge Mark Kearney of Pennsylvania wrote.

Scientists have found what they think is evidence of extant, if brief, flowing water on Mars.

In a NASA press conference on Monday, scientists claimed that images and spectra taken by the Mars Reconnaissance Orbiter’s HiRISE camera show what are called Recurrent Slope Lineae, or RSLs, straight dark streaks that run down the sides of craters and canyons on Mars. These features, which are a few meters across and hundreds of meters long, change with the seasons, becoming darker and more obvious in the spring and summer on the sides of crater walls facing the Sun. That strongly implies that warmth triggers the formation of the RSLs. The important finding: Scientists found evidence of salt deposits in these features, which in turn implies that briny, salty water is the force behind them.

Data from NASA’s Galaxy Evolution Explorer (GALEX) and the Hubble Space Telescope has confirmed the presence of a pair of supermassive black holes orbiting each other so closely that they’re moving at relativistic speeds—a significant fraction of the speed of light.

Super Blood moon isn’t so super so chill out everyone. But it was pretty!

US rank drops to 55th in 4G LTE speeds

The U.S. has fallen to No. 55 in LTE performance as speeds rise rapidly in countries that have leapfrogged some early adopters of the popular cellular system.

The average download speed on U.S. 4G networks inched up to 10Mbps (bits per second) in the June-August quarter, according to research company OpenSignal. That was an improvement from 9Mbps in the previous quarter, but the country’s global ranking fell from 43rd as users in other countries enjoyed much larger gains.

How the Car Industry Has Hidden Its Software Behind the DMCA

It was by sheer chance that the software “defeat device” that allowed Volkswagen to thwart emission tests on its diesel vehicles was discovered last year. The discovery came after a few university researchers tested a group of European cars made for the U.S. market.

The West Virginia University researchers drove the vehicles for thousands of miles, testing the emissions as they went along. They weren’t expecting to discover what they did: Nitrogen oxide (NOx) emissions rates 20 times the baseline set by the Environment Protection Agency (EPA).

It’s difficult to know how pollution will affect an individual’s health. Existing air quality guidelines, which range from national regulatory policies to those of the World Health Organization, are often based on exposure response functions that focus on the mass of the particles. But this measurement doesn’t account for differences in toxicity based on chemical differences—evidence suggests that chemical composition of pollutants dramatically influences their toxicity. As a result, it was hard to estimate the overall effects on mortality rates.

The authors estimate that the effects of particle pollutants killed 3.15 million individuals in 2010, with strokes (cerebrovascular disease) and heart attacks (ischemic heart disease) contributing most heavily. Analysis of ozone related mortality revealed a total estimate of 3.30 million people dying prematurely in 2010. An additional 3.54 million deaths per year are attributed to indoor air pollution caused by the use of solid fuels such as coal.

A local (to Santa Cruz) apparel line featuring custom icons of artisanal goods, from craft beer to hand-carved guitars. All to support the wonderful creativity of Santa Cruz

Scientists have solved the mystery of why the comet being studied by Europe’s Rosetta spacecraft is shaped like a rubber duck — it started off as two separate comets, a new study shows.