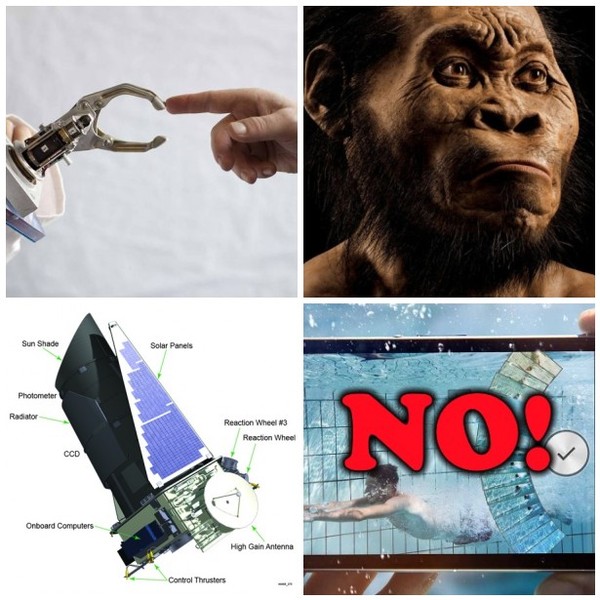 Man Receives a Prosthetic Hand That Allows Him To Feel

Researchers have created a prosthetic hand that people can actually feel through, for the first time ever.
The technology lets paralysed people feel actual sensations when touching objects — including light taps on the mechanical finger — and could be a huge breakthrough for prosthetics, according to its makers.

We call it T-Mobile Extended Range LTE − also known as “Band 12” or “700MHz spectrum” − and we’ve been lighting it up at break-neck pace. It’s already live in 170 markets and covers more than half of all Americans.  That means our total LTE network now reaches OVER 290 MILLION AMERICANS  (in case you’ve lost count, that’s just about everyone…there are 320 million people in this country in total).

Sony Decides Its Waterproof Xperia Phones Are Not Actually Waterproof

Sony seems hell bent on confusing its customers by giving very conflicting advice about its Xperia smartphones. If you’re familiar with the range, you’ll no doubt be aware of the advertising material that appears to show users taking photos in the rain and even (seemingly) underwater at the pool.

So we can’t take photos underwater? Who knows? Sony seems undecided, so it’s very hard to say for sure (we have, of course, reached out for comment). The advice to not use the phone underwater is rather at odds with the Z3 promotional video which very clearly shows sub-aqua use:

iOS 9 users will be able to route phone calls through a local Wi-Fi network, a feature that’s especially handy if you find yourself without a cellular connection.

The records, obtained by USA TODAY through the Freedom of Information Act, show DOE components reported a total of 1,131 cyberattacks over a 48-month period ending in October 2014. Of those attempted cyber intrusions, 159 were successful.
“The potential for an adversary to disrupt, shut down (power systems), or worse … is real here,” said Scott White, Professor of Homeland Security and Security Management and Director of the Computing Security and Technology program at Drexel University. “It’s absolutely real.”

If you follow the headlines, your confidence in science may have taken a hit lately.
Peer review? More like self-review. An investigation in November uncovered a scam in which researchers were rubber-stamping their own work, circumventing peer review at five high-profile publishers.

Using an end-to-end UHD video delivery system from Harmonic, NASA Television will have the capability to deliver linear 2160p60 video content, allowing viewers to enjoy footage on a wide range of television and internet-connected devices. The new UHD channel is expected to launch on Nov. 1, following preliminary tests.

In June of 2014, the K2 mission became fully operational. K2 repurposed the Kepler spacecraft and its incredible light sensitivity to survey the sky near the galactic equator using its excellent photometer. Due to the way Kepler needs to orient itself to use the solar wind to help remain on target, this survey will focus on one section of the sky for several months before moving to its next target. K2 will study the light from many kinds of targets, including supernova, variable stars, and of course, exoplanet transits.

In a recent Pew Research Center survey, most US adults were able to answer questions about the Earth’s core or nuclear weapons, but their science knowledge wavered when it came to concepts like the properties of a sound wave.
The questions focused on the physical sciences (physics, astronomy, geology, etc.) rather than the life sciences (health, medicine, etc.).

The team is calling this new species of human relative “Homo naledi,” and they say it appears to have buried its dead — a behavior scientists previously thought was limited to humans.

Berger’s team came up with the startling theory just days after reaching the place where the fossils — consisting of infants, children, adults and elderly individuals — were found, in a previously isolated chamber within the cave.

The team believes that the chamber, located 30 meters underground in the Cradle of Humanity world heritage site, was a burial ground — and that Homo naledi could have used fire to light the way.

In July, the Kilton Public Library in Lebanon, New Hampshire, was the first library in the country to become part of the anonymous Web surfing service Tor. The library allowed Tor users around the world to bounce their Internet traffic through the library, thus masking users’ locations.

Soon after state authorities received an email about it from an agent at the Department of Homeland Security.

After a meeting at which local police and city officials discussed how Tor could be exploited by criminals, the library pulled the plug on the project.