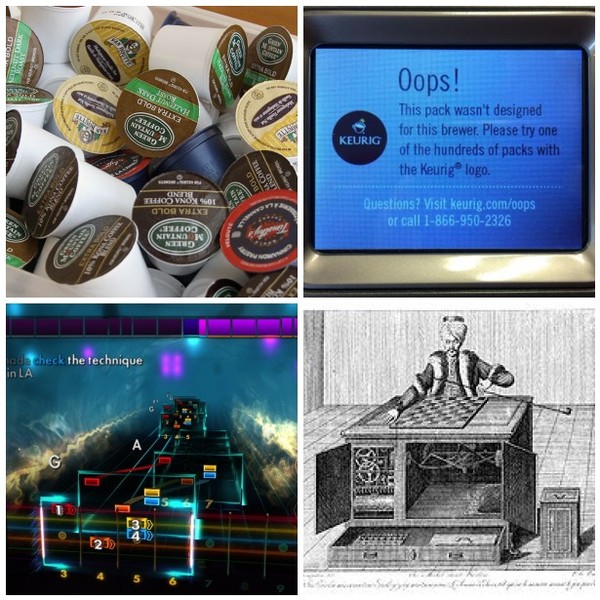 Dr Dawn Motyka joins the Geeks for fascinating, apparently unpronounceable stuff about the effect of cell phones on your body, gamification, and how Amazon’s mechanical Turk is helping speed up the Singularity.

Using the power of games to learn
Examples:

Coffee company Keurig Green Mountain offered something of a mea culpa on Wednesday night, when its CEO admitted that the company had been wrong to build its second-generation coffee makers with tech that prevented users from brewing their own coffee independent of Keurig’s licensing. Keurig Green Mountain stock is currently down 9 percent.
Last year, Keurig drew the ire of the Internet by incorporating a scheme similar to the Digital Rights Management (DRM) you see on e-books and video games into its Keurig 2.0 coffee maker. The next-generation machine forced users to brew with Keurig-approved coffee pods exclusively, using a digital scanner that looks for an ink marker on authorized K-cups. The company also discontinued its “My K-Cup” reusable pod, which meant that customers could no longer use their own coffee in a Keurig.
The response was swift, and people soon discovered that a simple piece of tape covering the scanner would override the “Oops!” message that off-brand coffee pod-buying scoundrels received from the machine. One family-owned coffee company, the Rogers Family Company, even produced its own “Freedom Clip” that did the same thing as the tape but with a saucier name. Jim Rogers, the Rogers Family Company vice president, told Ars in February, “We decided to offer the Freedom Clip for free, because we found Keurig’s attempt to lock out other coffees offensive. We thought it would be fun to give the giant, Keurig, a little poke."

Last December, at the Annual Conference on Neural Information Processing Systems, MIT researchers announced the compilation of the world’s largest database of images labeled according to scene type, with 7 million entries. By exploiting a machine-learning technique known as “deep learning” — which is a revival of the classic artificial-intelligence technique of neural networks — they used it to train the most successful scene-classifier yet, which was between 25 and 33 percent more accurate than its best predecessor.
After the MIT researchers’ network had processed millions of input images, readjusting its internal settings all the while, it was about 50 percent accurate at labeling scenes — where human beings are only 80 percent accurate, since they can disagree about high-level scene labels. But the researchers didn’t know how their network was doing what it was doing.

Web Extra: Edison's Talking Dolls Can Now Provide The Soundtrack To Your Nightmares

Back in 1890, Thomas Edison gave us some of the world’s first talking dolls. Today, the glassy-eyed cherubs that are still around stand about 2 feet tall; they have wooden limbs and a metal body; and they sound supercreepy. (If you’re looking for a soundtrack to your nightmares, listen to the audio story above.) Edison built and sold about 500 of them back in 1890. Now, new technology has made hearing them possible for the first time in decades.

A microscope was used to read the grooves instead of a stylus or needle to preserve the fragile hardware.