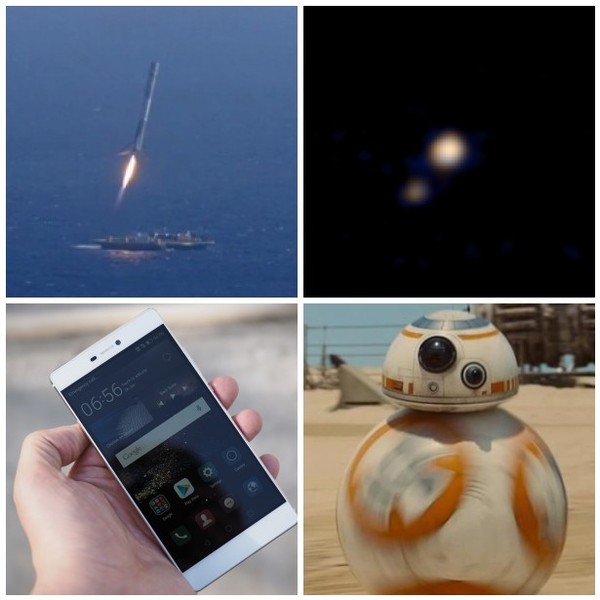 Huawei new flagship smartphone is called the P8. Replacing the P7 before it, this Android Lollipop phone has a 5.2-inch full HD display into a one-piece aluminum body and includes an 8-megapixel front-facing camera and a 13-megapixel camera on the back.

Huawei is now one of the top phone makers and though it use to make phones for other venders, it now creates phones for end users.

The Falcon 9 was seconds away from what would have been the first successful landing of a used booster stage on SpaceX’s Autonomous Spaceport Drone Ship (ASDS) when the vehicle toppled over and was destroyed.

Why 'designed for security' is a dubious designation

If you want to understand the pitfalls to serving America’s post-Snowden craving for secure technology, look no further than Anonabox, the crowd-funded privacy-enhancing home router. That project raised an astonishing $630,000 last year in campaigns on the crowd funding websites Kickstarter and Indiegogo by promising to protect its customers’ online privacy with a box that redirected all their Internet traffic through the anonymous ToR network.
As Wired.com reported last week, Anonabox’s parent company, Sochule Inc., had to recall devices it shipped to customers after an independent researcher discovered serious security flaws in the product. Those flaws would make it easy for anyone within wireless range of the Anonabox to connect to- and take control of the device. Quite simply: Anonabox – designed to offer extra security for Internet users- was actually proved less secure even than the consumer broadband routers its was supposed to supplant.

I’ve gone back and forth on this view a bit. I agree with what you said, Ben… it is not a feature. It should be simply integrated into the practice of building.

However, the problem is also that management doesn’t recognize security as a priority, but they do when it’s stated as a “feature”. Some of that has an effect on both ends… marketing term, sure… but also sells it to management to fund the time and effort that goes into it.

So, it’s a tough argument, because there’s the ideal, and there’s the reality of getting security ACTUALLY built in.

status of massive online open courses (like udacity) in the college environment.

Three years later, the Online Instruction Pilot Project has become another expensive example of the ineffectiveness—so far, anyway—of once-vaunted plans to widen access to college degrees by making them available online, including in massive online open courses, known as MOOCs.
The project, which cost $7 million to set up at a time when the state was cutting higher-education funding, aspired to let students take courses across campuses. A UCLA student, for example, would be able to take a UC-Irvine class online.

The 'Star Wars' BB-8 droid: How does it work in real life?

The super-fast rolling robot had only been glimpsed in the first trailer, which was released late last year. But before a jam-packed, enthusiastic crowd at the Star Wars Celebration convention in Anaheim, California, a real BB-8 rolled out in front of Star Wars:
Episode VII director J.J. Abrams and producer Kathleen Kennedy.
It has a robotic ball for a body, topped with an equally robotic head that not only doesn’t fall off but also lets the body move freely below it.

Disney is collaberating with Sphero to make BB-8 toys

Obligatory xkcd of a similar mechanism to BB-8:

Paris has been hit with a spate of anonymously-piloted drones flying over key landmarks, government buildings and even a nuclear power station. It’s not been clear if it’s a group of amateurs with bad timing or something more coordinated, which has spooked the locals and law enforcement alike. Thankfully, French firm ECA has been quick to respond to the potential threat, building an anti-drone drone that can hunt down drones and identify their pilots.

Prabal Dutta builds very small computers, so small you can’t hear them when you drop one. Really, really small. They will be used to allow us to detect our world in new and crazy ways.

Fun quote from this episode:

There are sores on people’s body’s that are cuter then JarJar. -Lyle